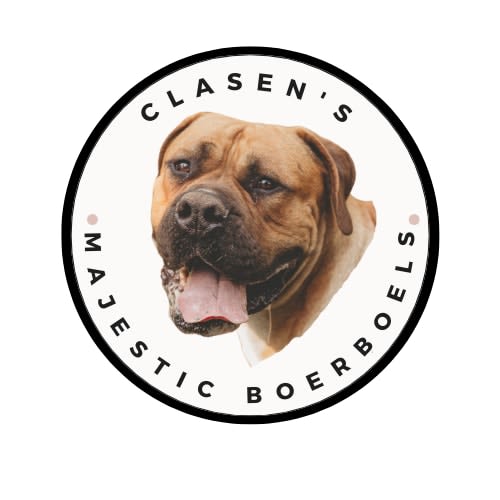 ORIGINS: The Boerboel’s ancestors were brought to Africa with early Dutch settlers. They brought their “Bullenbijters,” which were large, powerful dogs renowned for their protective instincts. There, these dogs were used for security in a hostile and wild landscape for centuries, eventually becoming associated with the settlers who then became farmers. In addition to protecting the homestead from intruders, these dogs were also excellent in tracking and hunting, able to hold large game for their owners to dispatch.


Although the Bullenbijter was believed to have provided the original basis for the breed, the exact concoction of dogs used to complete the breed remains a mystery. Dutch settlers first brought their dogs with them, but were soon followed by the English, so mastiffs, bullmastiffs, and bulldogs were most likely incorporated. It was also very likely that native aboriginal dogs were incorporated to ensure viability in the harsh environment. In the mid-1800s, diamonds and gold were discovered, which caused economic growth and immigration to sky rocket. De Beers imported dozens of bullmastiffs to guard their mines, and this breed also heavily influenced the Boerboel breed. As South Africa became increasingly populated with people and their dogs, the original type of Boerboel was threatened.


In the 1980s, breeders of these dogs came together to preserve the original type. Ideal specimens were collected throughout the regions and selectively bred as the foundation stock of the breed. In doing so, the original dogs were able to be restored in a fashion true to the old working type. Today, the Boerboel continues to grow in number and popularity, and he is still used as a farmer’s dog in his native South Africa.

​Head: Somewhat brachycephalic skull type, moderate in size, blocky in appearance, and in proportion to the rest of the body. The head is large, broad, deep, and substantial. It tapers just slightly from the broad-and-deep back skull toward the end of the muzzle. It is wrapped in powerful muscle. The topskull is broad, being equal in length (measured from stop to occiput) and width (measured in front of the ears, across the top). It is square and flat across the top, with well-developed temporalis muscles that accentuate the median furrow, which starts at the stop and disappears toward the occiput. The head is clean-cut and without excess skin or wrinkle; however, light wrinkling may appear on the forehead when alerted.


Eyes: Moderate in size, oval, almond, diamond, or open oval in shape and yellow or amber to dark brown in color, most often with eye color that matches or is lighter than the coat. Lighter colored eyes allow for a more penetrating stare. The eye rims are well-fitted and well-pigmented. Eye whites and haw should never be visible. The eyes are never bulging. There should be sufficient bone in the surrounding orbital sockets to protect the eyes. Any looseness of the eyelids or signs of entropion or ectropion are incorrect for this breed.


Ears: Medium in size, set high on the skull and fairly wide apart. They are V-shaped, broad at the base, with slight lift at the base. Tips and inner edges hang close to the head. When alert, the fold of the ears is level with and broadens the plane of the topskull. Length should result with ear tips falling just below eye level to the mid-point of the cheek (often in line with the level of the back molars). The ears are never cropped, long, overly large, semi-erect, or rose.


Muzzle: The muzzle is full, deep, broad, and square in appearance. The depth of the muzzle is approximately equal to the length, and the width is almost equal to the length. The plane, or bridge of the muzzle, is straight. Upper and lower jaws are well-developed, approximately equal in length, and have good bone substance, never appearing snipy or weak. The muzzle tapers only slightly from the broad and full base toward the nose when viewed from above.


Nose: The nose is well-pigmented and black, or self-colored according to the coat in nonstandard color varieties. The nostrils are well-opened. The vertical line of the nose (septum) is perpendicular to the top plane of the muzzle.


Neck: Moderate length allows for good head carriage, it is powerfully muscled with a muscular arch. The neck is broad and thick, tapering only slightly and smoothly from the deeper and broader body toward the head. The neck is clean-cut, without excess skin, throatiness, or pendulous dewlap, although some loose skin at the throat is permissible.


Chest: Deep and broad, but never wider than deep. The brisket extends to the point of the elbows.


Body: Muscular, deep, solid, and substantial. The body is never racy or refined. Width at forequarters is approximately equal to the width at the hindquarters. The body is capable of power, endurance, and stamina.


Feet: Large, oval to round, and compact, with well-arched toes and tough pads. Feet may orient straight forward or slightly outward.


Tail: Set fairly high as a natural extension of the topline. It is thick at the base and tapering toward the tip. The tail is carried in accordance with the dog’s mood and energy level; it is never tucked. Tails may be left natural (preferred) or docked short to the third vertebrae. Natural tails are of a moderate length, with the tip of the last vertebrae extending to the hock joints when held down. The natural tail may be straight, gently curved, or sabered.


Movement: Powerful, smooth, elastic, effortless, efficient, enduring, and energetic. The characteristics of healthy structure are evident: when moving away, the forelegs and rear pasterns should remain parallel to one another. When viewing movement from the front, the forelegs should remain parallel, with elbows and paws moving neither in nor out. From the rear, the back pads should be visible when the rear legs are extended. As speed increases, the forelimbs and hindlimbs will converge to the centerline of gravity. From the side, the topline should remain firm and level. Good reach of movement in the front allows the forepaw to extend out in a line with the nose. The width between the forefeet when extended should be approximately equal to the width between the hindfeet when extended, indicating balance, good reach, and good drive. Dogs that exhibit any sign of breathing or locomotive difficulty shall be disqualified from the show ring.


Temperament: The Boerboel is a people-oriented breed that bonds strongly to family and takes the role of protector very seriously (especially with children). Due to their size, along with their powerful and protective nature, early obedience training and socialization is imperative to ensure that the dogs learn to accept discipline, boundaries, and the ability to distinguish actual threats from perceived threats. When properly trained and socialized, the breed is well-known for being calm, even-tempered, and capable of determining friend from foe. They are eager to work alongside their people, and they can be easily trained using positive reinforcement methods. When faced with a threat, they will take charge, exhibiting their fierce and courageous nature. They can be naturally neutral, indifferent, or aloof toward strangers. Any unprovoked aggressive or fearful behavior toward people is incorrect for this breed.

The Breed Standard is a guideline which describes the ideal characteristics, temperament and appearance of the breed and ensures that …